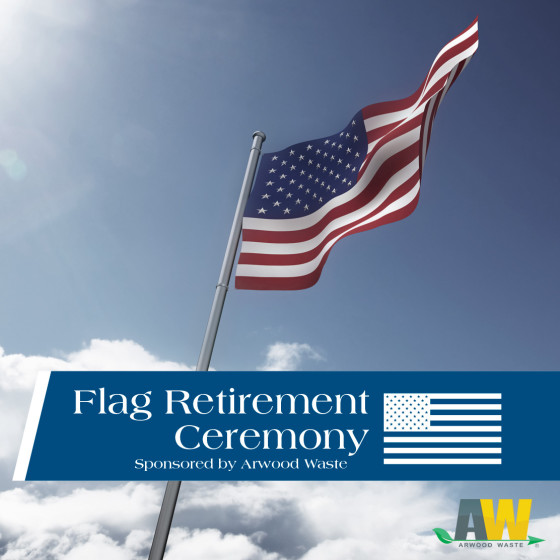 The U.S. flag is a beacon to the world of those core American values that we hold most dear–Freedom, Honor, Justice and Respect. The ‘Stars and Stripes’ will always represent those values and serve as a reminder of the sacrifices made to protect and defend them. And while those values live on, each physical U.S. flag eventually reaches the end of their life-span.

If you have a damaged, faded or old U.S. flag, Arwood Waste is honored to properly dispose of it as a free public service. Each year, in conjunction with Flag Day and in partnership with local Boy Scout Troops and local U.S. Military, Arwood Waste holds a Flag Retirement Ceremony.

Drop off your U.S. flag at any Arwood Waste location during regular business hours or mail your flag to our corporate offices:

2. We will retire your flag.

Arwood Waste stores all U.S. flags received and holds a Flag Retirement Ceremony in conjunction with Flag Day each year during which all collected flags are respectfully and properly disposed of. We’d be honored to include yours.

Properly retiring a flag is not a process that everyone is familiar with. Why not let your friends and families know about this free community service from Arwood Waste?

Arwood Waste is proud to offer this public service at no charge.

Get an Easy Quote